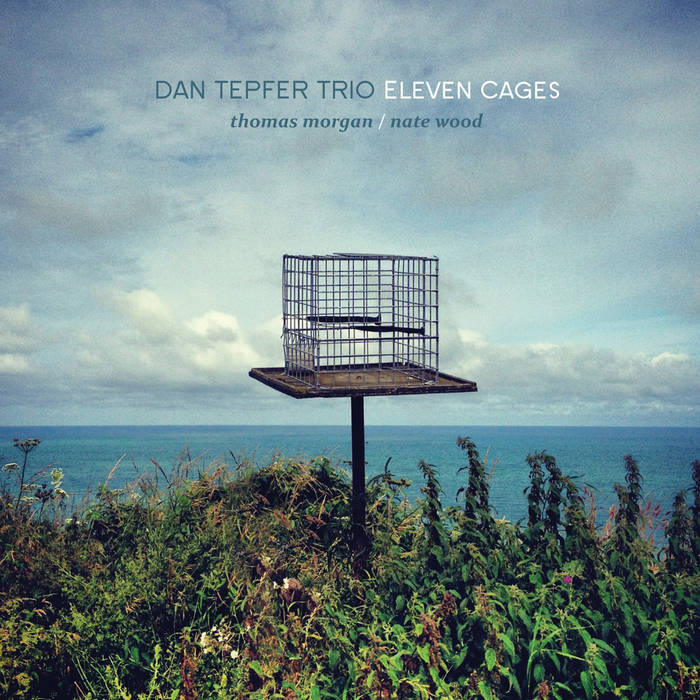 Dan Tepfer — whom New York magazine dubbed “one of the moment’s most adventurous and relevant musicians” — has criss-crossed the globe over the past several years. The broad success of the pianist’s 2011 album Goldberg Variations / Variations — an improvisational exploration of J.S. Bach’s masterpiece — led to packed concerts from London’s Wigmore Hall, Chicago’s Ravinia Festival and SF Jazz in San Francisco to events in Berlin, Prague, Tokyo, Vancouver and Manhattan’s Le Poisson Rouge, with The New York Times declaring the latter performance “riveting and inspiring.” Tepfer followed that with Small Constructions, a studio-savvy 2013 album with reed player Ben Wendel, as well as his ongoing collaboration with sax icon Lee Konitz. Then there was Tepfer’s composing of fractal music for classical groups and his fascinating algorithmic music project, Acoustic Informatics. Now — kicking off what will be one of his most productive years yet — Tepfer presents Eleven Cages, a trio album with bassist Thomas Morgan and drummer Nate Wood to be released by Sunnyside Records on June 2, 2017. The seemingly telepathic trio performs a sequence of hook-heavy Tepfer originals, two free-improv pieces and irresistible interpretations of a classic ballad (Gershwin’s “I Loves You, Porgy”) and an iconic pop hit (Beyoncé’s “Single Ladies”).

Eleven Cages features Tepfer returning to the jazz piano trio format for the first time since the 2010 album Five Pedals Deep (a Sunnyside release with Thomas Morgan and Ted Poor). According to The New York Times review, Five Pedals Deep saw Tepfer “unfurl his lyricism in great silvery arcs.” All Music Guide described the album as “inventive” and “intense,” while Stereophile judged it simply “beautiful.” For Eleven Cages, Tepfer sought to explore the concept of freedom within boundaries, as well as the malleability of time in music. The pianist — bred to blend his right brain and left brain with rare parity — began classical piano studies at age 6 at the Paris Conservatoire-Paul Dukas. But he took a circuitous route to a jazz career, first earning a bachelor’s degree in astrophysics from Scotland’s University of Edinburgh (with his thesis on “Numerical Simulations of Galactic Superwinds”). After playing extensively on the jazz scene in college and even enjoying a brief stint as an opera conductor, he graduated in 2005 from Boston’s New England Conservatory, completing his masters under the guidance of Danilo Perez. The acclaimed recordings, prize-winning performances and adventurous collaborations that have followed only underscore the fact that Tepfer is an ambitious thinker in music.

In his liner notes to Eleven Cages, Tepfer says: “There’s something about cages that magnifies freedom… Constraints surround freedom and give it a frame, be they physical cages or a formal structure we choose to create within. They challenge us to ask: How free I can be inside this particular cage? How much wiggle room is there? At the end of the day, we are all encaged in some way — by the limits of our bodies, of our minds, of the political system we find ourselves in. The best we can do is find the wiggle room, and use it.” Relating this to the album’s two interpretive pieces, Tepfer writes: “In both ‘I Loves You Porgy’ and ‘Single Ladies,’ the two covers on this record, relationships are cages, too. In the first, written by men, Porgy wants to settle down, but Bess needs to fly; in the second, co-written by Beyoncé, a woman chides a man for not taking the chance to commit when he could have. Both songs portray love as something of a brutal business: You’re either in a cage or breaking out of it.”

Discussing his original pieces for the trio, Tepfer says: “The common thread of my own compositions here is the malleability of time, the possibility of stretching and fracturing it. In ‘Roadrunner,’ a cliché rock groove is subtly fractured, beats added, then taken away, like looking at a known object through refracting glass. In ‘Little Princess,’ a chromatic descending bass line is ceaselessly compressed and expanded, ultimately to a near breaking point. ‘Hindi Hex’ uses a tihai, a traditional North Indian form in which an intricate rhythmic pattern is repeated three times, and displaces it over a shifting background of major and minor triads. In ‘547,’ four beats are alternately stretched over five and seven, and later over six, nine and eleven. I find the cross-rhythms this creates fascinating. Beyond the appeal of the sound of these transformations, the challenges these tunes present — the particular cages they put us in — focus our attention as players when we’re improvising over them, forcing us to fight for our freedom. There’s something about high-wire acts that engages both the mind and the heart.”

Reflecting on his trio mates, Tepfer waxes enthusiastic, saying: “Thomas Morgan and I think a lot alike. He’s a computer nerd like me, writing algorithms to transcribe 16th-century, Palestrina-style counterpoint. From his apprenticeship with Steve Coleman, Thomas is a master of complex rhythms, but he’s also such a warm, soulful, melodic player, which is why so many great musicians — Bill Frisell, Tomasz Stanko, etc. — want to play with him. As for Nate Wood, he isn’t just one of the go-to drummers on the scene, he’s also a singer-songwriter who makes an album every year, playing all the instruments himself. He’s also an excellent mastering engineer and a bassist who tours with Donny McCaslin and Wayne Krantz. The varying ways that Thomas and Nate play mean that they’re a great example of yin and yang. Nate is one of the most precise drummers you’ll hear, with every micro-detail in place. Thomas has a mystery to his playing, with this wide beat and deep feel. They bring interesting things out in each other — and in me.

“Because there aren’t any wasted notes in the way Thomas and Nate play together, they help me focus the music to its essentials — my pieces are pretty lean the way they’re presented on the new record,” Tepfer continues. “But this has also been an ongoing process for me, from working so closely with Bach’s music and with a Zen master like Lee Konitz. As an improviser, my note choices have become more conscious, the music-making more distilled. That said, what Thomas, Nate and I do is about maximizing possibilities, stretching things as much as we can without losing the essence.”

Returning to the album’s covers, Tepfer — who has re-imagined songs from Jacques Brel’s “Le Plat Pays” to Michael Jackson’s “Billie Jean” on past trio albums — refers to the essence of those numbers. “I start with the lyrics in a way,” he says, “because if you know the words, you can speak them in the music. I genuinely dig ‘Single Ladies,’ how it’s both super-earnest and self-mocking at the same time, both fierce and sweet, sublime and ridiculous. Then there’s the fresh, creative sound of the song, with all its hooks and that distilled quality I mentioned being a goal in my own music. My mother is an opera singer, so I grew up with ‘I Loves You, Porgy’ in Gershwin’s original operatic setting and, of course, then came to love versions from Nina Simone to early Bill Evans and later Keith Jarrett. In the opera, the song reflects acutely how complex romantic relationships can be. Then there is Gershwin’s melody, with its beautiful inevitability a hallmark of a great composer. But, again, engaging authentically with the lyrics makes the songs personal for me, and the personal is always meaningful. And meaning is everything.”

Bandcamp Daily  your guide to the world of Bandcamp

New sounds from Mavi, Ivy Sole & Moderator, plus AJ, the One joins the show, for her latest release