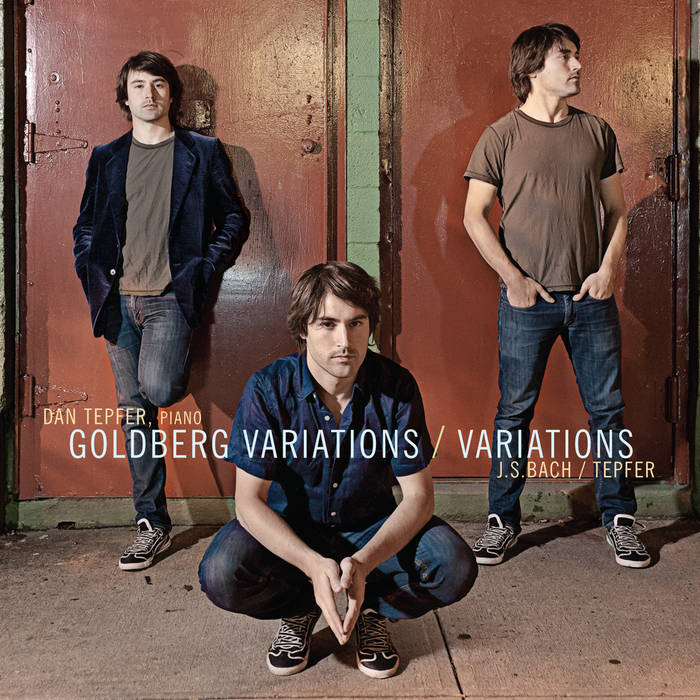 Tracks include the 30 original Goldberg Variations along with Tepfer's 30 Improvisations based on the Variations. There are two "Arias," as well. The total is 62 tracks.

Dan Tepfer has created a kaleidoscopic experience with his solo album Goldberg Variations / Variations, the jazz pianist approaching J.S. Bach's masterpiece – one of the classical canon's most totemic works – as an inspiring font for creativity. Interspersed with his affectionate interpretation of the complete "Goldbergs" are his own improvised variations on Bach's variations. No Jacques Loussier-style swinging of the classics, Tepfer's variations are marked by a ruminative joy, spiced with contemporary dissonances and a deep feel for the source as timeless music beyond category.

Although the Goldberg Variations are beloved now as an entrancing, virtually sacred work of art, Johann Sebastian Bach published the score – consisting of an "aria" and a set of 30 variations – in 1741 as a keyboard study, with the piece later nicknamed for the harpsichordist who might have been its first performer. From Glenn Gould to Pierre Hantaï, the modern world's greatest classical artists have performed and recorded the "Goldbergs." Investing himself totally in music he has known since childhood, Dan Tepfer recorded his Goldberg Variations / Variations completely solo, even engineering the late-night sessions himself for total immersion in the process. The result is both utterly individual and genuinely moving.

Goldberg Variations / Variations is the 29-year-old, New York-based Tepfer's sixth album as leader or co-leader, following three heading a trio, one of solo piano improvisations, and another featuring duets with veteran saxophone luminary Lee Konitz. Known for his rare improvisational gift and a complex yet melodic approach to music-making, the prize-winning pianist has been hailed as "a player of exceptional poise" by The New York Times, while Downbeat extolled his "ability to disappear into the music as he's making it."

For those who deem Bach's music untouchable, they should remember Stravinsky's rejoinder to those who criticized his transformation of Baroque compositions in Pulcinella as disrespectful: "You `respect,' but I love," he said. As for Tepfer, he says: "What I'm doing is definitely loving. But instead of recording the Goldberg Variations and then writing lengthy liner notes about how I feel about them, I'm expressing how I feel about them in music, with my improvisations on Bach's variations. One challenge was switching gears – playing this classical music that's a real test for me and for so many pianists, then the next minute really improvising and being free."

With Bach using the same chord progression throughout the Goldberg Variations, his musical process wasn't as different from jazz as it might seem. "That is really what we do in jazz, particularly when playing standards," Tepfer explains. "We take the chord progression of a tune, and it's often as simple as Bach's Aria, and we make variations on it. Lee Konitz has been playing the same tunes his whole life. One of the amazing things about him is you'll play the same song with him on tour night after night – say, `All the Things You Are' – and it will be really different every night. So if you recorded all of those and put them end to end, it might sound like what Bach
had done with the `Goldbergs,' taking one simple piece of material and weaving all these different emotional states into it. With my improvisations, it was a case of, how much more diversity can I get out of this chord progression? And what's really important to me as an improviser is to have a voice. So I'm reacting to Bach with my own tone, my own vocabulary."

Tepfer recorded the album alone – producing the sessions himself in the middle of the night – in the Yamaha Artist Services Salon in Manhattan, playing one of Yamaha's new CFX hand-built concert grand pianos. "I think if Glenn Gould were recording the `Goldbergs' with our technology today, he would've wanted to do it just as I did," Tepfer says. "He loved to work late at night, basically alone in the studio with just the engineers in the booth that he had to have. In the situation that I had, I could work alone all night long if I wanted. I wasn't trying to impress anyone, there wasn't any pressure. There was just me, the piano and me listening to myself. I could take my time figuring things out. It was ideal."

Goldberg Variations / Variations will elicit surprise in many listeners that what might seem like a crazy idea works so beautifully. It might even help prompt some to reconsider concepts of genre – that music doesn't necessarily have to be classical or jazz, that sometimes it can be just music. Mostly, Tepfer hopes listeners are moved by the album, "because I think the Goldberg Variations are one of the most profoundly affecting masterpieces," he says. "From this tiny piece of material, Bach was able to express this incredible range of feeling, from a visceral delight to the most introspective sadness. And the fact that all the variations flow together and make this complete whole is a way for Bach to convey how all these different emotions are part of life and that they belong together. The contrast is what makes a complete life, and a complete work of art."

Born in Paris to American parents, Tepfer began classical piano studies at age 6 at the Paris Conservatoire-Paul Dukas. He took a circuitous route to a jazz career, earning a bachelor's degree in astrophysics from Scotland's University of Edinburgh. He played extensively on the jazz scene in college and enjoyed a brief stint as an opera conductor; after graduating in 2005 from Boston’s New England Conservatory, where he completed his masters under the guidance of Danilo Perez, Tepfer moved to New York and quickly became an in-demand player and composer, performing not only with Lee Konitz but with such innovators as Steve Lacy, Paul Motian, Bob Brookmeyer, Joe Lovano, Ralph Towner, Mark Turner and Billy Hart.

Tepfer's awards include first prize and audience prize at the 2006 Montreux Jazz Festival Solo Piano Competition, first prize at the 2006 East Coast Jazz Festival Competition, and first prize at the 2007 competition of the American Pianists Association. He has been named a Cultural Envoy of the U.S. State Department, with recent travels to Azerbaijan, Georgia and the Czech Republic. He has also lectured and led master classes from London to Warsaw to Seoul. He was commissioned by the Prague Castle Guard Orchestra to compose a concerto for symphonic wind band and improvising piano, The View from Orohena, premiered in 2010. In addition to working with his new trio, Tepfer performs solo concerts of free improvisation.

Bandcamp Daily  your guide to the world of Bandcamp

New sounds from Mavi, Ivy Sole & Moderator, plus AJ, the One joins the show, for her latest release